The "sophistication" of chickens is questioned in Carmel

Most people at the recent Carmel City Council meeting were in favor of changing the current ordinance and allowing a few hens within city limits.  However, resident James Jungroth is still adamantly against chickens and predicts that "in just a few years, an unruly flock led by an abandoned fighting cock will disrupt the city, flummox animal control, spark fights between neighbors, make Carmel a laughingstock and generate a costly lawsuit after an aggressive rooster mauls a child."  Wow...doomsday, anybody?  Nevermind the fact that at least 3-4 people are attacked by a dog on Carmel Beach every year.  Forget about that...dogs are good.  Chickens are bad. Wake up, Lucy.  You are scary!
Others questioned the "sophistication" of chickens, such as Monta Potter, who said, "I would hope that we are not made fun of.  I think it's important that we continue to promote ourselves as a sophisticated city."  Worry, much?

Marlene Martin, proud chicken owner, who lives outside the city limits says that her chickens are much less trouble that either dogs or cats.  She said, "I'm not sure if I'm sophisticated, or not, but I love chickens.  It actually hurts me to think someone would think they're not sophisticated.  We have sexist, racist, ageist - this is animalist."

The council agreed that a new law should be drafted to allow chickens.  The planning commission will first consider the ordinance and then forward it to the council with recommendations.

I can just hear that crazy, child-mauling rooster pecking at the door.

You can download the full story from the Carmel Pinecone, here.
Posted by Jackie at 11:18 AM

Nice new look for your blog!

I just burst out laughing. A rooster mauling anyone is pure laughable. People question the oddest things. I told my friend that I wanted to raise hens in my backyard and she said, why? They are dirty! No they aren't, I told her, the owners have to be responsible and clean the coop. But they are not dirty! You can't win them all I guess.

A marauding band of chickens, much like pirates, attacking the good citizens, and heaven forfend that your fair city lose its reputation for sophistication. What a silly bunch of arguments, and happily it sounds like the chickens will win!

Hahahahaha!!!! I wonder if the lady who is worried she won't be perceived as "sophisticated" lives in one of the little hobbit houses that dot the town. I do have to admire the crazy guy's use of the word 'flummox'. I'm still giggling...!!!! I hope the chickens take over!!!! Geez, if Clint Eastwood could be mayor, why not a chicken???

Hi Jackie! I can't believe that adults can say such things! They should go to Key West, Florida and ask if their chicken & roosters cause harm!

Chickens are such entertaining characters and life would be poorer without them. You have to wonder what motivates some people.

Most sensible municipalities simply ban roosters. That solves the 'mauling' issue right there! I admit, an angst-ridden rooster is no fun, and they can harm small children and dogs, but sheesh Carmel, let's get real. I have an aggressive rooster, but he's no killer LOL. The noise they make is the real concern here. As for hens, ours are quieter than most dogs. They don't yip, and they don't bite the mailman. Most people who complain about chickens have never been within 50 feet of them. Keep the coops clean, and rodent free, and nobody will ever know they're in town.

Not to mention that most municipalities just make roosters illegal. Sheesh.

I'm growing organic vegetables in suburbia. The central coast climate provides lots of opportunities (& a few challenges) to vegetable growers. I'm just trying to sort it all out. For further info click here.

Vegetable Growing Guide for the central coast of CA 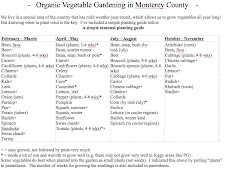 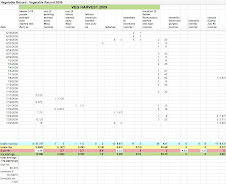